Huge congratulations to Muller Engineering and the City of Golden for receiving ACEC’s national Grand Award in the “Transportation” category for their work on Linking Lookout US 6 and 19th St. Interchange. ERO is proud to have teamed with Muller and to have been part of such an amazing and unique project for the City of Golden.

The City of Golden proposed improvements to the U.S. Highway 6 and 19th Street intersection, partially in Colorado Department of Transportation (CDOT) right‐of‐way.  As a subcontractor to the City’s engineering firm, ERO prepared a CDOT Documented Categorical Exclusion, which required preparation of various reports and assessments, and managed subcontractors for several resources, including visual, air quality, noise, and paleontology. The project contained many complexities and required a high level of coordination with the City of Golden and CDOT environmental staff.

The ACEC Engineering Excellence Awards received almost 200 project submittals, the winners in ACEC state competitions from around the country, and selected 16 Grand Award winners.  The awards were presented at the annual “Academy Awards of Engineering” celebration in early May in Washington D.C. 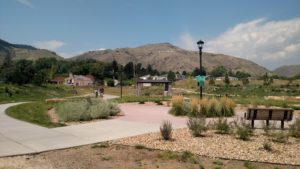