To help identify the presence of unmarked burials in a historical section of the cemetery, ERO performed a ground-penetrating radar (GPR) survey of the Cedar Creek Cemetery in Montrose, Colorado.  Funding for this project was provided through a History Colorado State Historical Fund archaeological assessment grant to assist the City of Montrose in their goal of preservation and responsible management of the cemetery.  Inconsistencies within the cemetery’s burial records, which span the last 130 years, have precipitated uncertainty in the location or existence of some burials in one of the oldest sections of the cemetery.

ERO analyzed cemetery records and a map of grave plots which we then used to create a map of the survey area containing 246 occupied lots, along with an additional 26 lots containing unknown or possible burials.  Using GPS and the existing lot markers in the cemetery, a grid was set up to conduct the GPR survey.  GPR is collected with a unit consisting of a 400 MHz antenna, a survey wheel, and a computer unit, which is rolled over the ground surface, thereby providing data with absolutely no disturbance to the ground or graves.  Careful analysis of the GPR results confirmed the presence of 10 burials in the questioned lots and identified an additional 41 unmarked, unrecorded burials throughout the survey area.  The unmarked burials identified with GPR may represent graves that were either previously unknown, graves that were incorrectly mapped, or graves that were mistakenly recorded in a different lot at the time of burial.  The project produced a a georeferenced map displaying the location of recorded and unrecorded graves within the survey area. 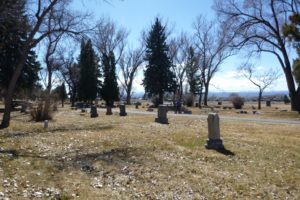 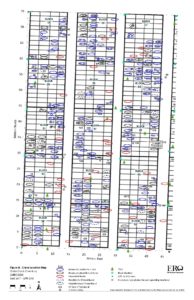 Georeferenced map of burials within the GPR survey grid.